Was Hollywood Made Famous With Billboard Advertising?
Published 04/16/2016 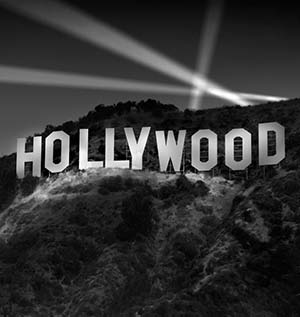 Many people don't know the storied history of the Hollywood sign and what makes it so iconic.

Hollywood was once an ordinary Western frontier. The skies were clear and the land was plentiful. Outdoor Advertising didn't exist on the vast pastures. The usual suspects occupied the land south of Sunset Boulevard. Cowboys, Thieves, Ranchers and Prospectors used the land and a time that puts this author in mind of Wyatt Earp or Billy the Kid. Over time, more and more of those living on the East Coast decided to gravitate towards California's more temperate climate. With that, real estate became a mainstay industry that drove the region. By the 1900's, the area was developing into the iconic town it would soon become.

There are conflicting stories about how Hollywood was actually given its name. We will present the facts to you and allow you to develop your own conclusions. We have developed some conclusions of our own, and we do not omit them. But, honestly, this is like a game of Clue. No proper records are kept on "how" someone comes up with a name.

The first story involves a woman named Daeida Wilcox. Her husband, Harvey Wilcox, founded the town in 1887. Some reports claim that Daeida got the name from a woman on a train who had a summer home in Florida named Hollywood. Other records indicate Daeida got the name from a neighbor who had a house in Holly Canyon that she called Hollywood. Either way, Daeida was taken with the name and shared it with her husband. Hollywood as we know it was born. The two later planned out a town on their property with Daeida landscaping the lots to be sold and naming the streets and sidewalks. In fact, the first sidewalk was just a short distance from their house and is only a few yards away from what is now the "Hollywood Walk of Fame". For her significant role in planning the original Hollywood town, Daeida is known as the "Mother of Hollywood".

That's how it could have happened...

The second story is that real estate magnate Hobart Johnston Whitly named the town after scouting the land and meeting an immigrant chinese laborer. He asked what the laborer was doing and he said "I'm hauling wood" in broken english. This sounded like Hollywood to Whitly. He later decided through that fate of inflection to name his new development Hollywood because it was so catchy. Whitly is often referred to as the "Father of Hollywood".

But here's what really happened...

We think. Like we said, we're not entirely sure. The few records that are available point to Mrs. Peacock. The facts seem to support the claim that Daeida Wilcox came up with the famous Hollywood name. It is extremely unclear how she came up with the name as these records are never kept and are reliant on second-hand accounts. The Whitly accounts are extremely scarce. Whitly also doesn't quite make sense with the timeline. But one thing is clear. H.J. Whitly knew how to develop a town. He participated in founding nearly 150 towns throughout the country in addition to his signature Hollywoodland. There is very little evidence to substantiate the hauling wood story but it sounds really good at a party.

At any rate, the town was not home to entertainers until roughly 1907. The small group of entertainers in the Chicago film company had to travel to the more temperate climate to complete a shoot. Only five short years later and a plethora of independent studios now called Hollywood home. By 1915, the film industry had officially taken America by storm. Aspiring actors and actresses frequented the town amazed by the allure of the new American dream; to become a star in entertainment.

The Billboard Advertisement That Changed History

Iconic. Timeless. Simple. The definitive symbol of the entertainment industry. With so much history, few remember the Hollywood Sign as the billboard advertisement it originally was. And yet, when you really stop and look at it, you can't help but wonder "what's the big deal?". It's white block lettering. It looks pretty rickety. A good storm could probably wash it away in an instant. How did this flimsy thing become such a legendary symbol? The roots are buried deep in the nostalgia of the city.

Despite the high profile of the entertainment industry, real estate development has always driven the region's economy. The Hollywood sign was originally built to promote a housing development in 1923. It was an outdoor advertising campaign of the highest order. The block letters each measured 50 feet tall by 30 feet wide. At the start, there were over 4,000 lightbulbs embedded within the letters. They flashed "Hollywoodland" across the valley for thousands to see. Hollywood was promoted as the place to be for up and comers looking to settle in the West. This sign was a symbol of it's greatness.

The original name of the housing development Hollywoodland. Harry Chandler spent 21,000 dollars (roughly $265,000 in today's money) to promote his new project with his flashy advertising sign neslted into the nearby hillside. The town thrived for years until it was devastated by the great depression. In the ensuing years, the developers abandoned the Hollwoodland sign as it was no longer practical to maintain. The sign deteriorated but local forces kept it alive. Barely

When the hollywood real estate group abandoned the sign during the great depression, two government agencies took over the sign. The Chamber of Commerce and the Parks Department shared responsibility for restoring and maintaing the sign but they weren't all that enthusiastic about it. They begrugged the cost of lighting the sign so they removed all of the lightbulbs, saving on both electricity and replacement bulbs. They removed the "land" part from the sign so the sign could be used as a symbol for the entire city. But they refused to pony up any cash to maintain the sign.

By the 1970's, the sign had further deteriorated to the point where the sign read Hollywo d, with the second O missing. At that point, spurred on by a campaign led by Hugh Hefner, Alice Cooper, and Gene Autry, 9 total donors each contributed $27,700. The money was used to replace each of the original letters with more permanent 45 foot tall steel letters. Nine donors. Nine letters. A donor for each letter. Amazing that the original sign cost 21,000 dollars to put up in its entirety and the new sign cost a whopping 27,700 dollars per letter. And this one didn't even light up. Nevertheless, nostalgic donors were willing to see the sign restored.

This project built the sign as you see it today. It was completed in 1978 and is recognized throughout the world and revered by many. It is brilliant in it's renovated simplicity. Though the sign has been a financial hole of restoration and maintenance, it has endured over 80 years and donors have helped ensure proper its proper place in history. Where once it was an economic driver for the housing industry, the converted billboard advertisement is now a symbol for the whole city to trade on. The entertainment industry benefits immensely from the publicity the sign generates. Hollywood would not quite be hollywood without the billboard that started it all.

Hollywood Promotes It's Own Brand

Hollywood never misses an opportunity to display their billboard. They began displaying it in movies immediately after the hollywood real estate group abandoned it. The real estate industry's use of the billboard as an outdoor advertisement was only meant to last two years. As you can see, some of the best opportunites are created by accident. The billboard was exploited in movies for years before it's 1978 renovation.

By the time the early 1970's rolled around, the billboard was in shambles. It was missing letters, it had been the site of numerous vandalisms and pranks, and the end was certainly near. It was bringing down the city instead of lifing it up. It was designated as a historical landmark in 1973 which solidified it's place on the Griffith Park Hillside. Then the hollywood donors finally ponied up. Producers, Actors, and titans of industry forked over incredible sums of money to see the sign restored. Many knew an entire industry was driven largely with the help of the sign. That first list of movies probably didn't do much for you. This second list should be more relevant, even for the non-movie buff. As you can see, once the sign was renovated, it played a part in feature films much more frequently.

This list is far from comprehensive. These are only just some of the movies hollywood has shown at least a shot of the sign in. You don't realize how many there actually are until you start to add them up. Basically, if a movie has anything to do with Los Angeles at any point in the plot, you're going to see a shot of the sign. Apparently it and the Golden Gate Bridge are the only two landmarks in California. See if you can remember the camio the sign made in movies we did not mention. In total, hollywood has gotten mileage from the sign in close to 100 movies, most of them filmed in the new-age; after the renovation.

Hollywood didn't stop at movies. It's everywhere. They paired their movie shoots with shots of the sign in some 30 television series dating back to the beloved "I Love Lucy" sitcom of the 1950s. Many times the shot was in the opening credits and recurred throughout the series. The sign also appears in several pop-culture video games created in the 2000s. Most notable is Grand Theft Auto: San Andreas (2004). On the plus side, Los Angeles is nowhere near as dangerous as it is depicted in that game. The hollywood sign has been the subject of song lyrics. It has been featured in music videos. Indeed, it has been thrust into the historical limelight by the very people it has helped promote. How's that for brilliant.

If you ever fancy a visit, there are several hiking trails within the Santa Monica Mountains that still provide tremendous views of the sign. Walking paths originally carved by animals now connect nature and culture. Griffith Park offers hikers and up close and personal view of the sign. However you're still not allowed to touch. Too many people have gotten their grubby little mitts on the sign over the years. You can, however, get some amazing vantage points. On the longest trail you can rise above the signs in Normas letters looking out atop the Los Angeles basin reading the backwards. On a particularly clear Day you can even see the ocean.

The Hollywood sign turned out to be one of the single greatest billboard advertising campaigns of all time. It was meant for a two year run. That's all. Who would have dreamed it would become the iconic symbol of an entire industry. And an industry it wasn't built to promote at that. Proper promotion depends on a good idea, good timing, and obviously a little bit of good old fashined luck.