Billboard Advertising : The Cost of Billboards Was Worth it for these Giants 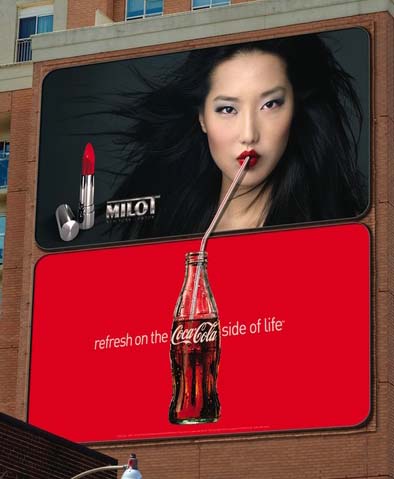 Billboard costs versus costs of other forms of advertising are often seen as a prohibitive expense for companies. With more and more easily accessible mediums like facebook, twitter, and YouTube, advertisers are wondering if billboards are worth it. After all, the one thing all of social media has in common is that it's an inexpensive way to get the word out. But often times that is not enough. Many household names rely on billboard advertising for effective marketing campaigns. While rarely their exclusive platform, these companies use their billboards effectively and prove that advertising mediums of yesteryear still have their value.

How Did Wal-Mart Become a Grocier?

Walmart wanted to start offering fresh groceries in many of its stores. Previously, Wal-mart was only seen as a place to buy non-perishable goods at a discount price. In order to familiarize the public with their new line of products, Walmart had a few challenges to overcome. The first was to get the word out that they were offering fresh groceries at bargain barrel prices. But the biggest challenge was to convince customers that their groceries were going to be high quality. Customers would easily accept that Wal-mart could offer a lower price; they were doing it with every other product they offered. But with food, consumers required a bit more quality assurance. This required Walmart to make people aware of their product, make them trust their product, and encourage them to go to their stores.

How Did Wal-Mart Advertise?

Here's how they used their billboard advertising to tackle their challenges:

These were not all giant billboards you might see on the side of the freeway or in a metropolitan area. They picked specific billboards of all sizes near their stores. They also made use of many forms of mobile advertising; utilizing large bus posters and wraps to help engage viewers on the move. Actionable messaging while people are in transit engaged viewers and yielded impressive results.

Today, it is easy to see the rebranding of Walmart as a clear success. Consumers frequent the superstore for everything on their shopping lists, including groceries. Their focused campaign strategy created awareness and communicated the message they wanted quickly.

Out of home has been the Chick-fil-A's bread and butter (pardon the pun) for years. Chic-Fil-A has use billboards more frequently than any other company today. This has allowed them to stand out in an environment where they spend less on advertising than most others in the fast food industry. Whether it's standing firmly on their decision to stay closed on Sundays or using cows to advertise chicken, Chic-Fil-A has figured out the recipe. They have figured out how to make good chicken and make people notice.

With their limited advertising budget, chic-fil-a places a hard emphasis on their billboards. Their billboards are simple, humorous and, frankly, they're everywhere they want to be. They advertise in high profile locations near their target markets. Their advertisements regularly display mischevious cows encouraging people to eat chicken. They often use billboard extensions that bleed outside the surface area of their billboard structures to help them stand out.

In Chicago, billboard placements include a 3 dimensional cow that gives you the impression you've just caught him doing something he shouldn't. He is finishing a sign that reads "Eat More Chix". The large structures that Chic-Fil-A advertises on give them an incredible ability to stand out and they take full advantage of it. In short, their strategy is to get viewer's attention and promote a friendly brand image centered around their product.

Why Did Chic-Fil-A's Strategy Work?

Billboards are overlooked by many of Chic-Fil-A's competitors. When is the last time you saw a Burger King billboard? With the exception of McDonald's (who throws big dollars at virtually every advertising medium), most fast food restaurants don't bother with OOH Advertising. But reaching consumers when they're in their cars and hungry can create business immediately. Chic-Fil-A has taken advantage of this opporunity. They communicate their message to consumers at a low price in a space that is largely unoccupied by the competition.

How did they bring Conan back?

Believe it or not, Lamar Billboards played a hand in bringing Conan O'Brien back to the airwaves. In January of 2010, NBC announced Conan O'Brien would no longer host the tonight show. No doubt a devastating blow to Conan and his fans. To add to the frustration of Conan and his followers, O'Brien was bound by contract; he was not legally allowed to be on television. Shortly after Conan exited the stage his presence could be felt again, this time on social media. He was just as funny as ever and fans wanted him back. Some of his fans were at Lamar.

Why Did They Use Digital Billboards to Promote Conan?

Lamar wanted to promote Conan everywhere they could. Because digital billboards are so versatile, they were able to use unoccupied space efficiently. When a space wasn't sold or was transitioning between campaigns, Lamar would pop in a Conan tweet or Facebook post to promote the icon. It was a win/win. People eventually got the red-headed funny man back on their t.v. screens and the company didn't lose any revenue. Digital billboards were a perfect choice.

Just how well did the conan campaign work?

Conan's audience flooded back to him. The billboards got rave reviews on social media. Followers began liking his social media posts and leaving kind-hearted comments; begging the media legend to return to their screens. The billboards were mentioned constantly in the posts. Negative comments were scarce and most dealt with people who felt left out because they hadn't seen the billboards. Less than a month after the mayhem began, Conan announced a new late-night show to debut on TBS.

What did Mastercard do to boost consumer perception of their brand?

Chances are, you've got a pretty good idea what Mastercard did. Their unique advertising campaign is has not been quickly forgotten.

The "priceless" campaign was an imminent success in Mastercard's effort to market their brand to high spending demographics. It was aimed at providing those who have money with the perception that Mastercard benefits could give them experiences money can't buy. Their advertisements showcased an exclusive club of people making memories that could last a lifetime; all with their handy Mastercard.

How Did Mastercard Use Billboard Advertising?

We all remember the commercials, they were effective. But Mastercard made another brilliant move as well. They supplemented the t.v. ad spend with a strategic billboard campaign. It was, in a word, targeted. Mastercard was very specific about who they marketed to. For six months, they targeted the ten most affluent cities in America and cherry picked billboards in the highest income areas. They used a combination of mobile billboards, billboards on transit systems and railways, and large bulletin displays in concentrated pockets of each target city.

What were Mastercard's Results?

After rigorous six month campaign that hit all advertising platforms, Mastercard succeeded in boosting their brand within their target demographic. Studies show:

Today, Mastercard remains a giant in the credit card world. Just about everyone remembers their iconic campaign that solidified their place. The campaign was a glowing success. It increased brand awareness, customer ratings, and revenue. They spent a lot of capital up front in the hopes that it would pay off down the road. A gamble based on the confidence they had in their advertising team.

Advertising is steadily becoming a more and more complicated world. There are numerous avenues that are only in their infancy. Billboards may be an advertising platform of the past but they can still prove valuable when used properly. They are rarely the mainstay form of advertising for a business and that trend will likely continue into the future. But they are not to be overlooked. Take a page from some of the most successful brand marketers in history and consider supplementing your campaign with billboard advertising.